From North America to Asia, Europe to Africa, and nearly every corner of the planet, global superstar Kenny Rogers touched millions of people all over the world with his music for more than six decades. This was especially true in Jamaica as generations of Jamaicans, whose love of country music dates back to the 1950s when the Caribbean nation’s first commercial radio station arrived in Kingston bringing with it an eclectic mix of country, pop, R&B, classical and more, grew up on Rogers’ music, a staple on the radio as well as a fixture on the island’s sound systems. Since the ’70s, Rogers’ songs have been covered by reggae and dancehall artists like Delroy Wilson & Jennifer Lara, Busy Signal, Sister Nancy and many others. Rogers himself collaborated with Wyclef Jean on a dub plate version of his beloved song “The Gambler,” which helped Jean’s Refugee Sound System win one of Jamaica’s most popular soundclashes in 2000. The song was featured on Jean’s album, The Ecleftic – 2 Side II A Book, later that year as “Kenny Rogers – Pharoahe Monch Dub Plate.”

To celebrate Jamaica’s love for Kenny Rogers and to bridge country and reggae music, two seemingly different genres with many common threads and a fascinating intertwined history, the legendary Sly Dunbar of the acclaimed reggae rhythm section, Sly & Robbie and The Taxi Gang, has created a reggae mix of “The Gambler,” one of the world’s best known American country songs. For his inspired reinterpretation, and the first-ever officially sanctioned reggae remix of a Kenny Rogers song, Dunbar, who along with the late bassist Robbie Shakespeare were one of the most prolific musical duos and production teams – estimated to have played on or produced more than 200,000 tracks, from countless reggae artists to The Rolling Stones, Grace Jones, Bob Dylan, No Doubt and Paul McCartney – kept Rogers’ original vocal and the track’s lead guitar and had his band re-record the music like it was a 1978 recording session with Peter Tosh. The end result is a song that pays homage to Rogers’ influence on Jamaican music while creating a new version filled with tropical beach vibes that will serve as the perfect soundtrack for summertime, family road trips, poolside hangs, tiki bar singalongs and a great addition on playlists alongside “Three Little Birds,” “Margaritaville” and “It’s Five O’Clock Somewhere.” “The Gambler (Sly’s TAXI Gang Remix)” is available now on all streaming and download services.

“I am a great fan of Kenny Rogers so when I got the call to do this remix for ‘The Gambler’ I couldn’t believe it and thought wow this should be great for me because most of his songs have this kind of reggae kind of twist, country and western has this kind of reggae feel to it,” said Sly Dunbar from Sly & Robbie and the Taxi Gang. “Everyone in Jamaicalistens to a lot of country and western, especially Kenny Rogers. The people know his songs and when he came to Jamaica to perform the people were singing all his songs. I enjoyed doing this remix and want to say thanks to the Kenny Rogers Estate for giving me the opportunity to create a reggae remix for this legendary song.” 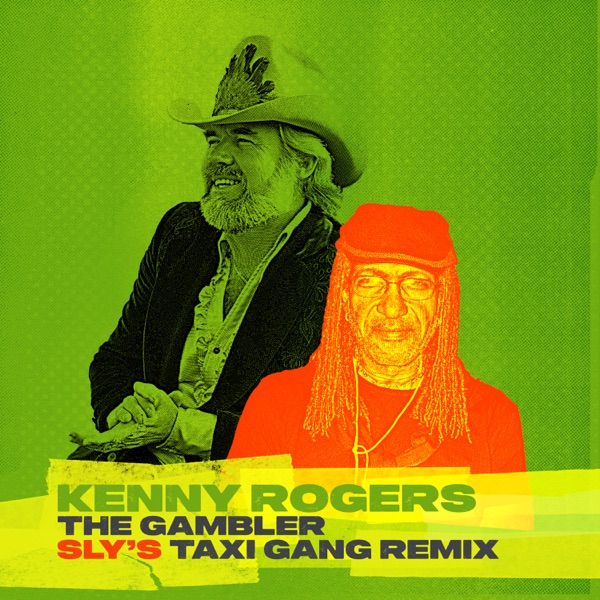 Despite Jamaica’s love for Rogers, it wasn’t until “The Gambler” performed in the country for his first time in January 2004 at the Air Jamaica Jazz & Blues Festival that he found out how truly popular he was there. “We just assumed it was a show, until it took us four hours to get from our hotel to the concert because so many people were walking to the venue,” Rogers said. “I never assume people know my music, [but] they knew every word. [It was] one of the most fun performances I’ve ever done. Jamaicans live music, they don’t just listen to it.” So overwhelmed by the response he received, Rogers returned for an encore performance later that year in Kingston in November at King’s House, the official residence of the Governor-General of Jamaica, drawing an enormous crowd. As the rave review in the Jamaica Gleanerexclaimed, “Kenny Rogers could have been a coward – or at least played it safe – at King’s House on Thursday night. Instead, he gambled and won jackpot after jackpot of applause from the huge crowd gathered on the lawns of the Governor-General’s residence for ‘One Night Only’.”

Rogers fell in love with the island and its people who welcomed him with open arms and would return for additional concerts and several vacations over the years. Upon hearing the news of his death, the Prime Minister of Jamaica, Andrew Holness, sent his condolences: “I pause to acknowledge the passing of one of the greatest singers and performers of our time, Kenny Rogers. Like many Jamaicans, I grew up listening to his ‘story telling to music’ country and western hits in the 70s and 80s. My favorite was ‘Coward of the County’ and ‘[The] Gambler.’ May his soul Rest In Peace.”

Country music has long been embraced by Jamaica, from being some of the first music to be played on the country’s first commercial radio station, Radio Jamaica Rediffusion – aka RJR, to Jamaica’s love of Westerns and cowboy movies, which inspired the names of many dancehall artists. After hearing Claude Gray’s 1961 country hit, “I’ll Just Have Another Cup Of Coffee (Then I’ll Go),” Bob Marley reinterpreted the song in 1962 for his second single “One Cup Of Coffee.” Years later Marley gave Darrell Glenn’s “Crying In The Chapel” a makeover as “Selassie Is The Chapel.” In 1963, the Skatalites covered Johnny Cash’s “Ring of Fire” as an instrumental, leading the way for a tradition of ska and reggae-tinged instrumental versions of country hits. In 1972, Toots & The Maytals released their reggae take on John Denver’s “Take Me Home, Country Roads,” transporting the song from West Virgina to West Jamaica. Almost as soon as Kenny Rogers’music made its way to the Caribbean, reggae and dancehall artists began to pay tribute with their own covers, which continues to this day.

Originally written by Don Schlitz, “The Gambler” hit #1 on the Billboard Country singles chart in 1978 for three weeks. The song was so successful and popular that it also spawned a TV movie on CBS, starring Rogers himself in the title role. The film was a smash hit on the airwaves and generated four other follow-ups, making it the longest running miniseries franchise on television. It also was the beginning of Rogers’ second career as an actor on television and movies.

In a career that spanned more than six decades, Kenny Rogers left an indelible mark on the history of American music. His songs have endeared millions of music lovers around the world. Chart-topping hits like “The Gambler,” “Lady,” “Islands In The Stream,” “Lucille,” “She Believes In Me,” and “Through the Years” are just a handful of Kenny Rogers’songs that have inspired generations of artists and fans alike. Rogers, with twenty-four number-one hits, was a Country Music Hall of Fame member, six-time CMA Awards winner, three-time GRAMMY® Award winner, recipient of the CMA Willie Nelson Lifetime Achievement Award in 2013, CMT Artist of a Lifetime Award honoree in 2015 and has been voted the “Favorite Singer of All Time” in a joint poll by readers of both USA Today and People.